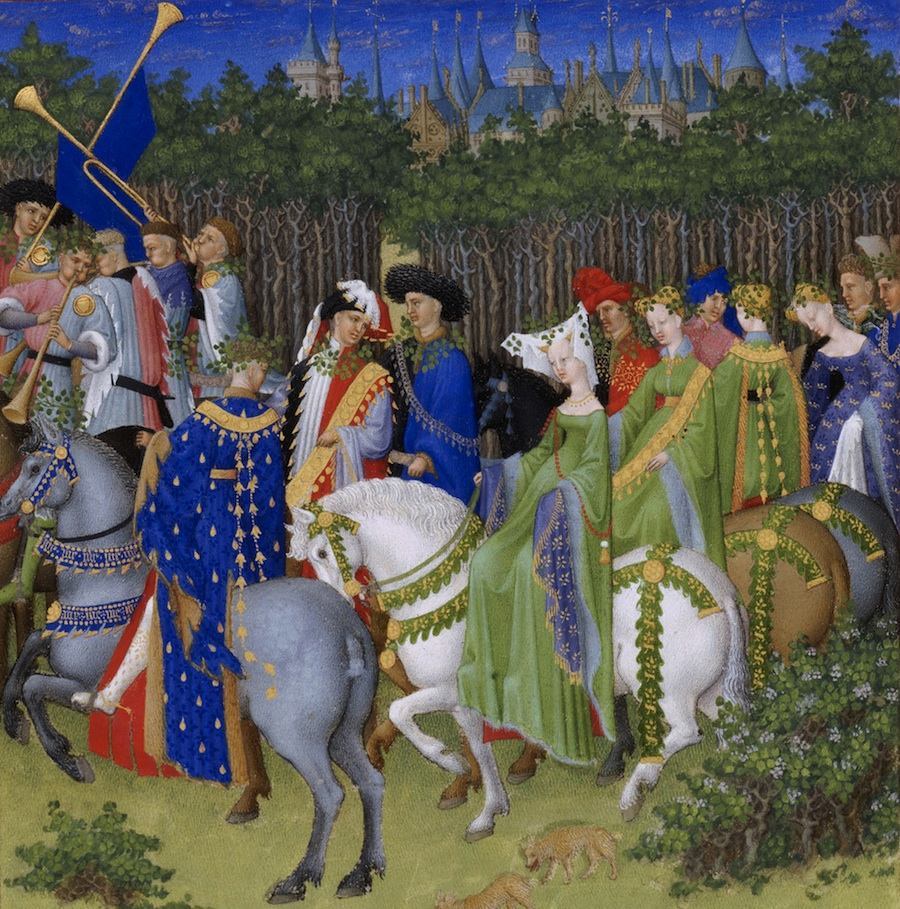 Q.
To many of us, preparing intricate dishes for even one round of a 2020 cooking competition looks plenty stressful. But what was it like to create and stage food for ravenous, judgy royals at Late Medieval feasts?

A.
Master Chef Chiquart Amizco offers us a peek in. Poor Amizco had to bow his head down extra low to his boss, Amadeus VIII, Duke of Savoy.

‘To you, the very high, very renowned, and very powerful prince and lord, Monseigneur Ayme, first duke of Savoy, honor and reverence, with the prompt desire to obey your commands, I offer my very humble and devoted respects. Formerly, my most dread lord, myself Chyquart, being no more than the least of your humble subjects, always your affectionate and devoted servant…’

At the Duke’s urging, Maistre Chiquart published Du fait de cuisine – a compendium of his recipes and entertainment – in 1420. A party planner extraordinaire, Amizco understood the importance of impeccable presentation. His was a world of excruciating detail and a tightly supervised workforce.

The Maistre is oft noted for his astonishly thorough recipes. Interested in recreating his parma tarts? You’ll have to make your way through 1,415 words in the English translation.

Here’s an 83 word sample: ‘…And then arrange that you have herbs, that is sage, parsley, hyssop and marjoram, of which have such a large amount of parsley that you have a great bowlfull drained and with the leaves stripped off the stems, and sage, hyssop, and marjoram added in measure; then put them in a fair and clean cornue, and wash them well and properly in three or four changes of fresh water, and then put them on fair and clean boards and chop them very small…’

There was no pinch of this, dash of that in Master Chiquart Amizco’s kitchen. How can we the untitled careless learn from his painstaking years logged in the royal kitchen?

Well, we can start by digging for some of the Maistre’s core philosophies. Follow his lead and even the most dread guests might leave singing our praises. Luckily, Amizco’s words are easily available to us thanks to the translation of Elizabeth Cook. 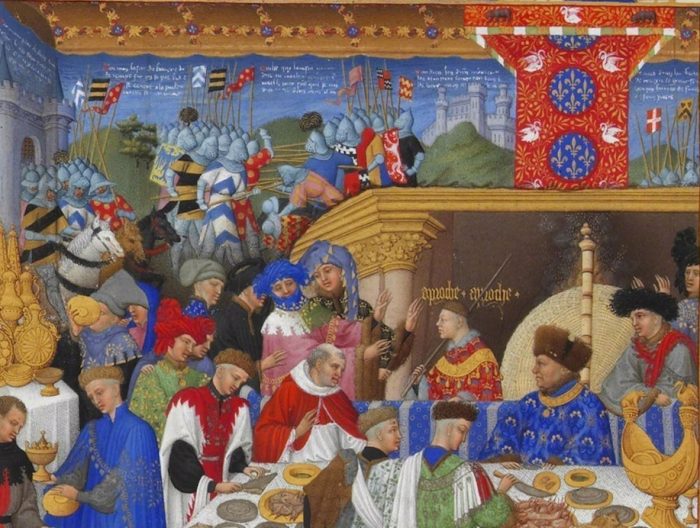 i. The More Food, the merrier

‘And first, God permitting to be held a most honorable feast at which are kings, queens, dukes, duchesses, counts, countesses, princes, princesses, marquis, marquises, barons, baronesses and lords of lower estate, and nobles also a great number, there are needed, for the ordinary cookery and to make the feast honorably, to the honor of the lord who is giving the said feast, the things which follow.’

‘And as at such a feast there could be some very high, puissant, noble, venerable and honorable lords and ladies who do not eat meat, for these there must be fish, marine and fresh-water, fresh and salt, in such manner as one can get them.’

‘Again, for the said feast there should be provided two charges of the major spices, that is white ginger, Mecca ginger, cinnamon, grains of paradise, and pepper.

The minor spices: of nutmeg six pounds, of cloves six pounds, of mace six pounds, and of galingale six pounds; again, 30 loaves of sugar, 25 pounds of saffron, 6 charges of almonds, one charge of rice, 30 pounds of amydon, 12 baskets of candied raisins, 12 baskets of good candied figs, 8 baskets of candied prunes, a quintal of dates, 40 pounds of pine nuts, 18 pounds of turnsole, 18 pounds of alkanet, 18 pounds of gold leaf, one pound of camphor, one hundred ells of good and fine tissue for straining; and these things are for nothing but the use of the kitchen. And again, there should be for the said feast two hundred boxes of sugar-spice pellets [dragié] of all sorts and colors to put on potages. And if the feast lasts longer one will thus be provided for the extra.’

iii. Work with the Best Equipment

‘…and there should be twenty large frying pans, a dozen large casks, fifty small casks, sixty cornues [bowls with handles], one hundred wooden bowls, a dozen grills, six large graters, one hundred wooden spoons, twenty-five slotted spoons both large and small, six hooks, twenty iron shovels, twenty rotisseries, with turning mechanisms and irons for holding the spits. And one should definitely not trust wooden spits, because they will rot and you could lose all your meat..’

‘And because at this feast there are some lords or ladies as was said above who have their own master cooks whom they command to prepare and make ready certain things, for such there should be given and made available to the said master cook quickly, amply, in great abundance and promptly everything for which he asks and which he needs for the said lord or lady or both so that he can serve them to his taste.’ 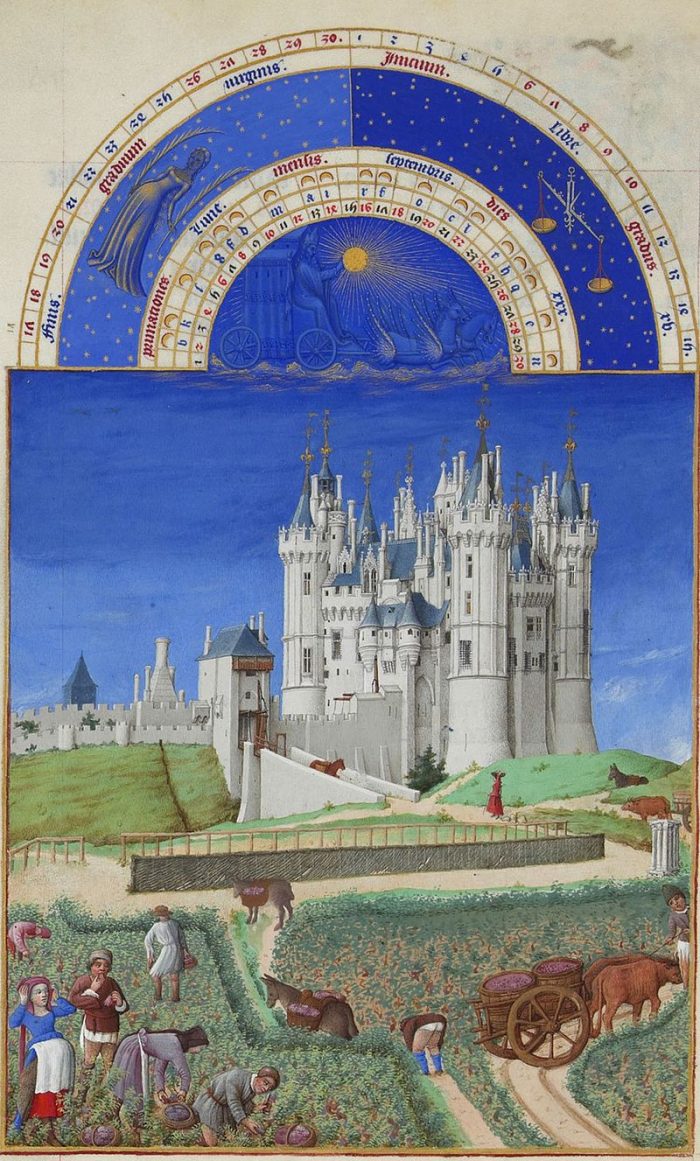 ‘Also, frumenty, venison, tarts, talmoses, cream flans, a cameline bruet, civet of hares, rosy bruet, a blancmange divided into four colors put in one serving dish; and for an entremet, a high castle wherein is in the middle the fountain of Love.’

And how to make said castle? Well, for starters…

‘For a lofty entremet, that is a castle, there should be made for its base a fair large litter to be carried by four men, and in the said litter must be four towers to be put in each quarter of the said litter, and each tower should be fortified and machicolated; and each tower has crossbowmen and archers to defend the said fortress, and also in each tower is a candle or wax torch to illuminate; and they bear branches of all trees bearing all manner of flowers and fruit, and on the said branches all manner of birds.’

‘And within the curtains should be three or four young children playing very well, one a rebec, another a lute, psaltery, or harp, and others who have good voices to sing appropriate, sweet, and pleasant songs so that one is aware that these are sirens in the sea by their clear singing.’

‘And to give understanding to him who will make these colors for making this blancmange divided into four colors: to make the first color, that is gold, take beaten saffron according to the quantity which you want to make and moisten it with milk from the pot which you have set up for making the gold blancmange; and then put it slowly while stirring with a good spoon into the said pot which you want to have the color of gold….’

viii. Offer Options for Those Who Might Be Feeling Under The Weather

‘And because at such a noble, large and notable feast as is described above, at which would be such great companies of great, noble and valiant lords as are named above, it would be a miracle if there were no ailing or sick people, nor afflicted with any infirmities or maladies. Therefore I, Chyquart–first deferring to the orders and sayings of the noble, good and valiant lords the doctors–would like to teach and devise according to my slight understanding how to make and prepare some foods sufficiently good and strengthening for the sick.

And first a restorative, a recise, an almond butter, stuffed crayfish, a green purée of spinach prepared in two manners, quinces in pastry also in two manners, a couleys, pears cooked without touching coals or water, a plumeus of apples, a blancmange from capons, another blancmange from partridge, oatmeal, chickpeas, semolina, barley.’ 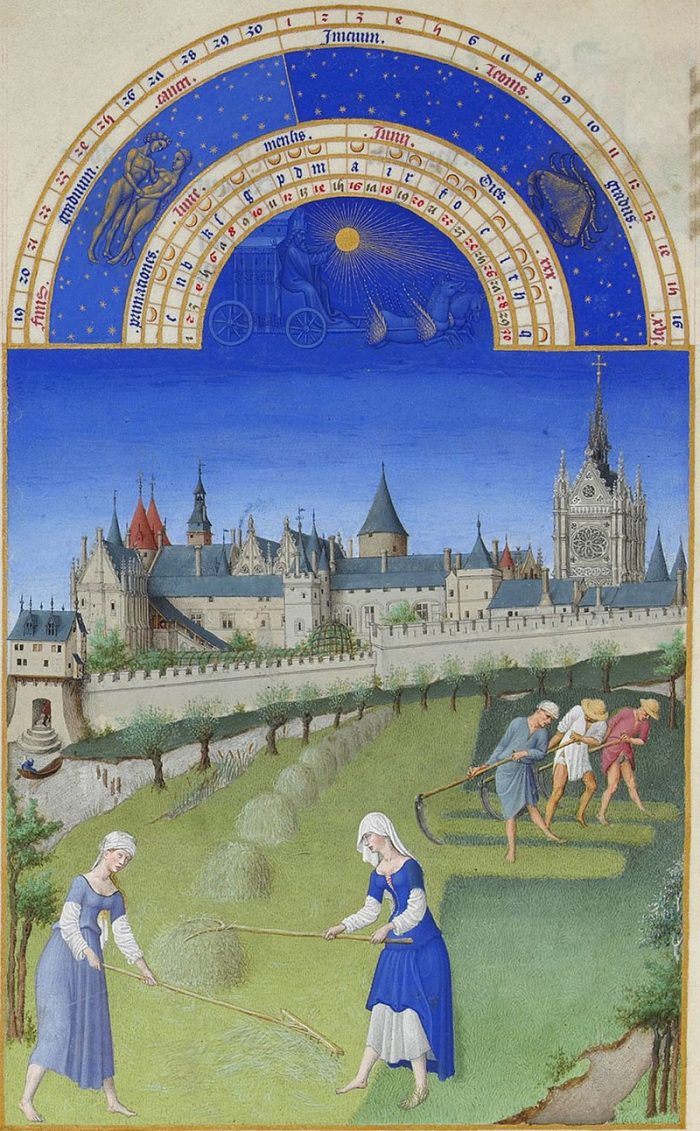 ix. Break out the Finery

…’chop it very fine, the meat and the bones also all together, then put it into the said flask, and three ounces or so of good rosewater and also as much of fair fresh water and a little bit of salt, and an ounce or more of fine pearls which should be put in a very little bag made of fair and clean cloth of strong silk or linen, and also very good, virtuous, valiant and worthy precious stones, that is diamonds, pearls, rubies, sapphires, turquoises, emeralds, coral, amber, jasper, jacinth, chalcedonies(?), onyx, crystal, chalcedonies, smaragdus [emerald? malachite?], sardonyx, sard, chrysolites [peridot?], beryls, topazes, chrysoprase, and amethysts, and all other good and virtuous precious stones–of all these only those ordered by the doctor…’

x. Mind Your Own Health

‘Who wishes to maintain his body in health and resist the epidemic should have joy, flee sadness, leave the place where the sickness is, and frequent joyous company, drink good wine, use clean food, make good odors to oppose the foul smell, and not go out if it is not fair and clear.

The Sweet Smell Of Home