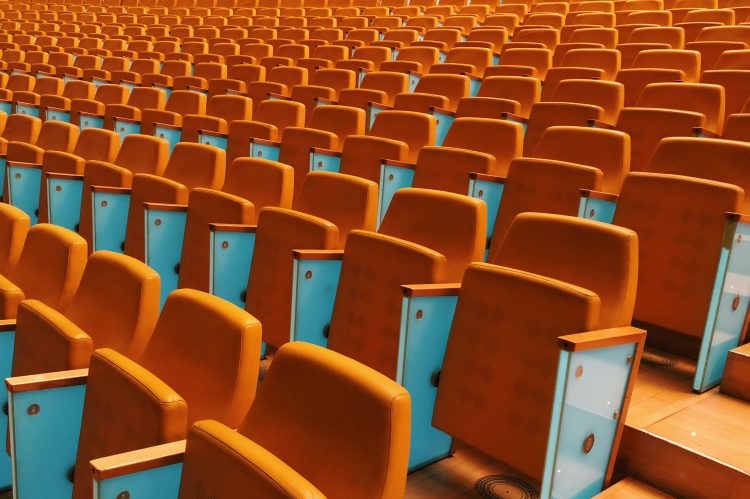 Q.
Yet another strange slice of pandemic life: watching late night comedy and Zoom sets without any audience laughter. It makes one think of laugh tracks – how did they come to be and what’s their future in a socially distanced world?

A.
It’s been jarring watching late night comedy hosts run through their monologues with no audience. Joke 1. Silence. Joke 2. Silence. Some have brought in their producers or family members to belly laugh when the punch line hits.

Researchers have found that we, with our auditory feature detectors, are neurologically driven to respond to the laughter of others. One laugh can spur another even in the absence of anyone saying anything funny. It’s not called ‘infectious laughter’ for nothing.

Before he passed in 2019, Robert Provine – Professor of Psychology & Neuroscience at the University of Maryland – long studied what it is that makes us laugh and how our bodies do it. It was Provine who analyzed the laughing epidemic that broke out in 1962 Tanganyika. It started with a group of high school teen girls, spread through the town and ran so out of control, fourteen schools closed and more than one thousand people caught the giggles. It lasted on and off for two and a half years.

In his 2012 book Curious Behaviour, Provine writes: ‘The contagious laugh response is immediate and involuntary, involving the most direct communication possible between people – brain to brain.’ ‘People are much more likely to smile or talk to themselves,’ Provine continues, ‘than they are to laugh when they are alone.’ 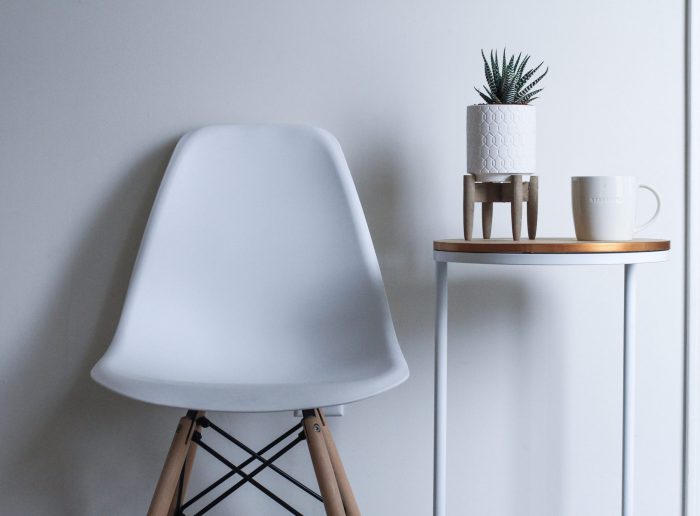 Canned laughter, aka laugh tracks or the Laff Box, was perfected by 1950s American sound engineer Charles Douglass. He recorded multiple people’s laughs – sharp soprano, deep bass, quick bursts, peak and valley, snorts – and fed them into the brass-padlocked mystery machine that he, and only he, would wheel onto 1950s-70’s  TV studio sets.

In Patent 2,924,460  – filed in 1954 – Charles R. Douglass described ‘a sound effects apparatus which is particularly useful in producing simultaneously a plurality of related sounds; for example, the sound of laughter, ranging from the chuckle of an individual to the prolonged hearty laughter of a group, such as an audience.’ 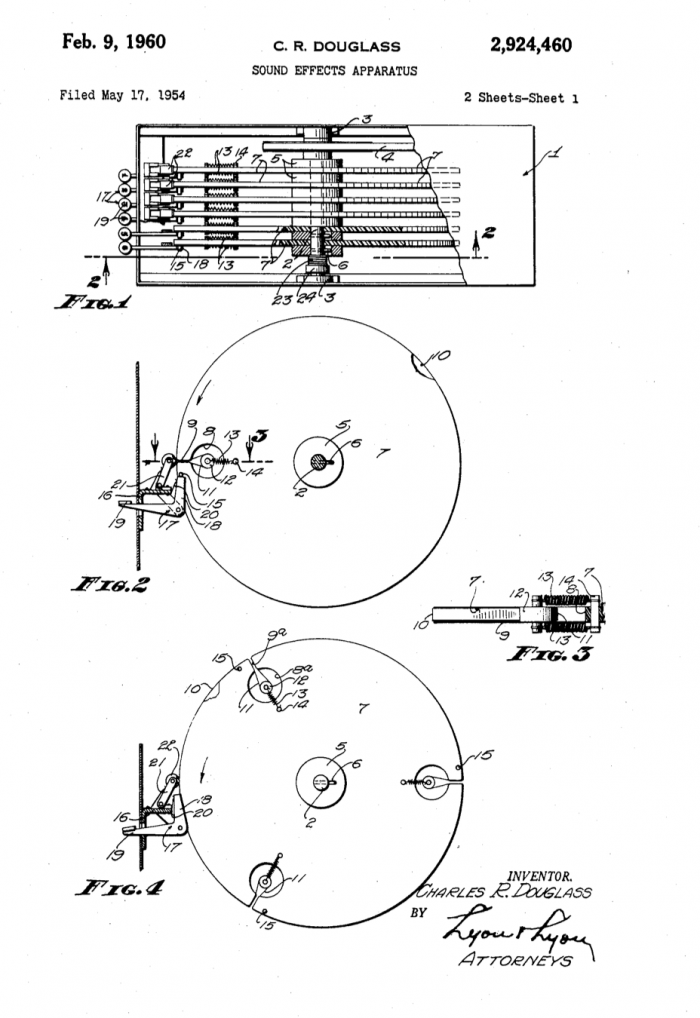 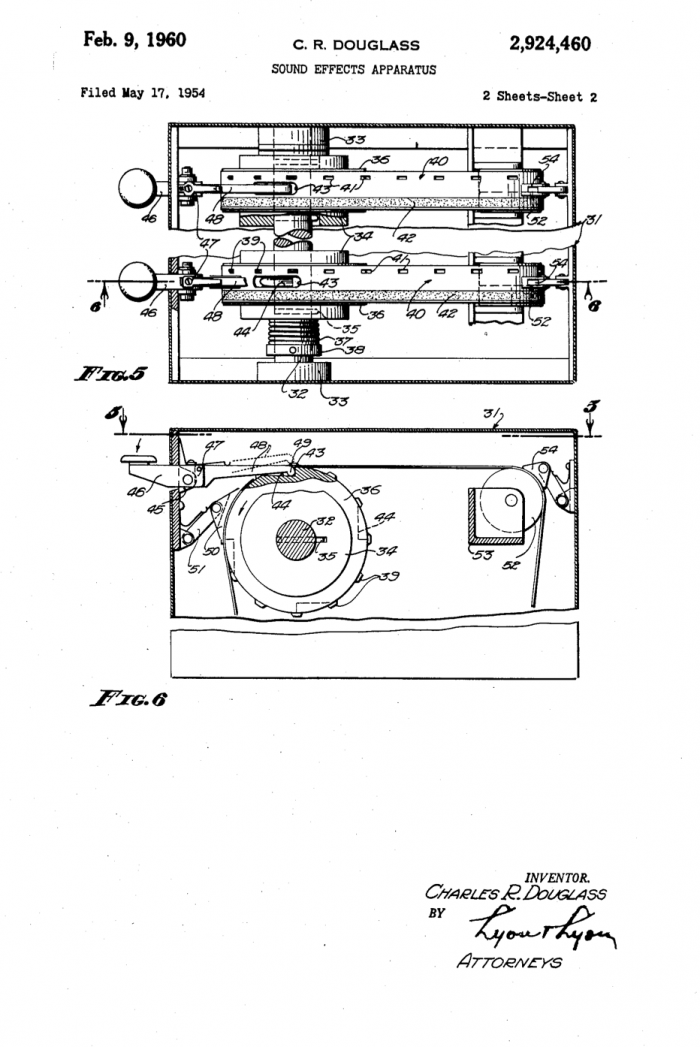 This Sound Effects Apparatus, Douglass wrote: ‘is particularly useful in dubbing sound effects into a transcription, moving picture or kinescope recording’…simultaneously with recording or in later editing. It could be done so ‘without noticeable lag, ‘accurately on cue.’

You would have heard Laff Box tracks in popular shows of the past:

While some more recent comedies film without any laughter, others – like the blockbuster Big Bang Theory – invite us to laugh along with the live audience.

There are those who hate the thought of  ‘artless, intelligence-insulting’ laugh-along tracks. In a 1967 interview, Groucho Marx said: “Those phony, recorded laughs on television comedies have done more to destroy comedy than anything else. The laugh track has made it too easy for writers. They know that if a joke doesn’t go over, it can be covered with a laugh track.”

Others prefer a Douglass Laff Box to joking in silence or relying on the ill-timed responses of a live studio audience. 21st Century researchers have found that people do rate jokes as more amusing when they are presented with genuine, accompanying laughter.

So, what will happen if this 2020 social distancing continues – now, or in the future. Will more shows re-introduce the no-audience laugh track to keep us chuckling with our invisible friends? What if late night hosts or stand-up comedians were to move to virtual environments with avatar audiences – maybe even avatars with our viewer faces? How would a Douglass laugh track feel then?